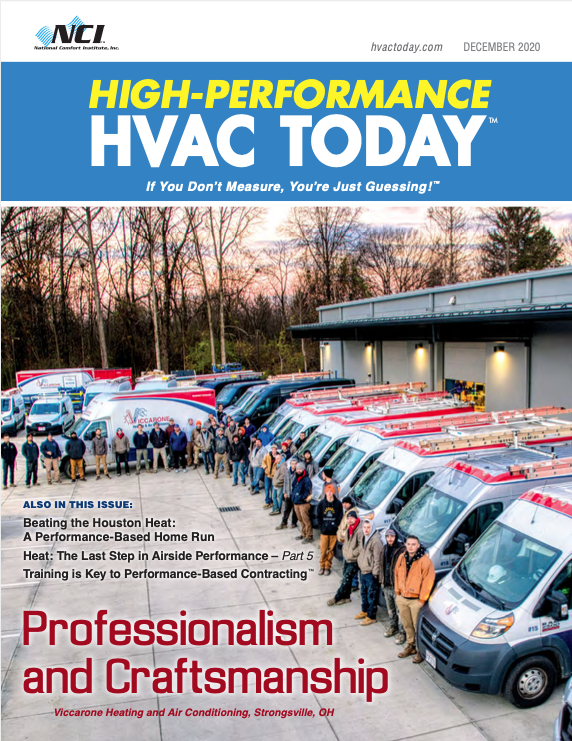 Gino Viccarone is a lifer. From the time of his graduation from the West Side Institute vocational school in Cleveland, OH, to where he is today, he has only worked in the HVAC Industry.

His first job was with a local HVAC contracting company where he worked for slightly more than eight years as a service technician. The hours were long, the work could be grueling, especially during the hot, muggy Cleveland summers. Eventually, he was given the opportunity to do some installation work and he fell in love.

In 1994, he decided to start his own company, and Viccarone Heating and Air Conditioning was born. He operated the business from his home.

“My father was retiring from his job at the Cleveland Plain Dealer newspaper and he decided to volunteer four years of his time riding along with me in the truck. He refused to let me pay him. He often would buy me lunch, especially on those days when I was getting frustrated.”

THE EARLY YEARS
In the beginning, Viccarone did a lot of commercial work and as the business grew, he needed to get out of the house. In those early days, he worked a lot for an industrial manufacturing company in Cleveland, OH known as Kirkwood Industries doing, as he says, “whatever they needed.”

Much of that work was servicing and maintaining their rooftop units, creating drying ovens, as well as dust collection systems. They were his biggest client. 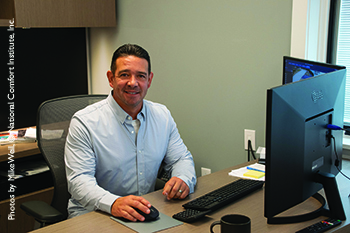 Gino Viccarone sits in the “command center” in the newly constructed
headquarters. While working there, he was hired to hook up a dust collection system to a plasma table and the result was his decision to buy his first plasma table.

“That purchase was a huge risk for me,” he says, “because I really couldn’t afford to do it financially.”

And then Kirkwood Industries closed up shop and moved operations out of the country and Viccarone lost his biggest source of income. As providence would have it, one of Gino’s friends asked for help on a home he was building.

Up to that point, Gino had never done new construction work and says he was always willing to try new and challenging things. When that project was done, Gino says he knew that new construction was where he wanted to be.

After this project, Gino’s friend helped him land a job with a national home-building organization – Kimball Homes – and that is the point in this story where Viccarone Heating found its footing and focused on residential new construction.

“The HVAC systems we put into homes must always deliver the highest quality possible so that customers get the most from the money they spend,” Gino explains. “I always used my training and what I learned on the job to do the best I could. There was no corner-cutting. It had to be done right.”

His reputation for quality work and resultant customer accolades led, one day, to a representative from Ryan Homes visiting one of Viccarone’s job sites. This Ryan representative saw how Gino designed and installed ductwork and wanted him to work for Ryan Homes. Two or three months later that is exactly what happened.

Print
Posted By Viccarone in General
Most Recent

As the Spring season continues, summer comes with high humidity levels outside of your home. Did you know humidity can increase inside your home, causing unwanted moisture build-up? Should you leave your bathroom fan on during the winter and summer? Are there more ways to eliminate moisture in your

Do You Know What Static Pressure Is In HVAC?

Static pressure is the resistance to airflow in ductwork. Air does flow more accessible in a radius, curved or triangular fitting over a right-angled or square fabricated

Condensers During The Winter Months

It's mid-January, which means winter is in full swing. Now that winter is here; you should inspect your AC unit's outdoor condenser. Covering your condenser properly is essential to keeping your unit in top condition during winter and